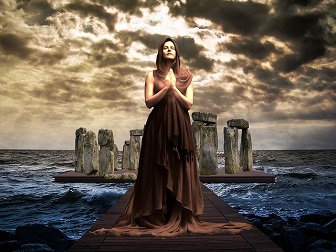 Since its inception in the mid 20th century, the religion of Wicca has continued to witness increasing acceptance from people all over the globe.

Wicca is unlike most religion. It has no higher authority, prophet, leader or even a bible to guide its followers. Instead, individuals are free to choose how they follow this religion and grow themselves as they deem fit.

This freedom and ability to chose what to believe and act on may strange to most people, but in every essence, it is the strength of the Wicca religion and one of the profound qualities of the faith.

Wicca is a complex religion that most people often associate with witchcraft, paganism and the devil. This usually is not far from the truth but not in the way most people seem to understand it. For a Wiccan, religion is about bending or redirecting spiritual forces in nature to affect the world and their lives.

A Wiccan belief that the world we see and all of its elements – rocks, trees, crystals, rivers etc. all have special forces in them which can be channelled and controlled to affect our lives in extraordinary ways. To most Wiccans, there isn’t anything magical about magic – it is just another toolset in a Wiccan’s arsenal.

Since the Wiccan religion deals with believers attuning themselves to the natural rhythm of life forces within the natural elements, it makes perfect sense to have minimal rules or orders to guide the process – after all, we are all different, and our experiences and ability to channel these natural forces will differ significantly.

This, of course, does not mean that there are no rules in the Wiccan religion. There are two core rules a Wiccan should adhere to when they are practising their crafts: The Wiccan Rede and Rule of Three.

The Wiccan Rede is a part of 26-line poetry that outlines how a Wicca should behave. It is one of the most critical moral compasses for practising Wiccans and helps to ensure they do only that which is good not only to them but to others as well.

The Wiccan rede reads “An it harms none, do what ye will”. This can be translated to means that whatever energy you will be channelling or whatever sacrifice or spell you will be casting, if it does not harm anyone, then you are free to do it. If the magic, on the other hand, is contrary to the law, then the rule of three will apply.

The Rule of Three

The rule of three is one of the most popular law in the Wiccan community. This law is also known as Three-fold Law or Law of Return. It states that whatever energy a Wiccan puts out whether good or bad will return to the Wiccan in three-fold. This means that whatever a person does, whether physically or spiritually, there will be a return three times the initial result of the action. This is often called karma – though a good comparison but the rule of three is quite different from the concept of karma – it manifests in this present life.

There are many other rules which are generally accepted by Wiccans all over the world, such as personal responsibility for every action, belief in ancestry, belief in the afterlife, special holidays and so many others. These laws, however, are not as widely accepted and adhered to as much as the rule of three and the Wicca rede.

Latest posts
Blog Catgeories
Archives
Subscribe to Blog via Email
Find a crystal / product
NewsletterPlease subscribe to our Newsletter for updates, seasonal discounts and other offers...