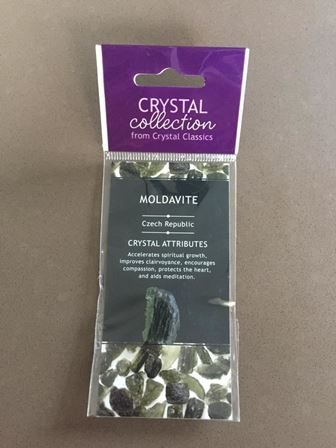 We often get people asking questions about our Moldavite so we have written this blog to try to answer some of the common questions that we get about it.

We often get people asking questions about our Moldavite so we have written this blog to try to answer some of the common questions that we get about it.

Moldavite is a natural crystal that was formed when a meteorite hit Earth and threw a great amount of hot rock and sand into the sky. As the rock fell back down to Earth it cooled, oxidised and solidified from its molten form into the green semi-transparent crystal that we know as Moldavite, which is an oxidised form of Silicon (common sand), chemically represented as SiO2. As a consequence of the rapid cooling in mid-air as it fell, bubbles solidify in the crystal giving it a mottled appearance. In fact, you can often distinguish it from fake Moldavite by looking for these bubbles in your Moldavite as fake Moldavite is unlikely to have it.

1. Is it genuine? I thought that the original mine had all dried up?

Firstly, all of our Moldavites are genuine and we get it from a long-standing reputable specialist supplier in crystals. It is not treated in any way. Some people ask if there is any certification of this with our Moldavite, but as it would cost over £300 from a gemologist for each piece, most people would not want to pay this for each crystal, so our crystal supplier kindly include a card with detailed information on both the crystals’ holistic and chemical properties. Fake Moldavite has known to be supplied as pieces of green-tinted glass – look for the bubbles formed during oxidation in real Moldavite!

Some people say that that it’s no longer possible to get Moldavite because the original mine dried up and while the original mine most likely has dried up now, there are other mines dotted around in secret locations (for obvious reasons) which still yield a plentiful supply of genuine Moldavite.

People are often quite keen to get hold of Moldavite because it is said to have extra-terrestrial spiritual properties and although it is true that the asteroid that hit the Earth can be classed as extra-terrestrial, the rock which Moldavite is formed from is itself Earthen silicon-based sand.

Our customers still report back to us that they can feel a great deal of power from our Moldavite and perhaps, indeed, it is this extra-terrestrial link which gives rise to a spiritual connection with extra-dimensional beings and/or energies.

Our finished packs of Moldavite

2. Why is it such a small piece? Can I get a bigger piece?

Moldavite is a semi-precious stone and so has a high price to weight/size ratio. This will mean that it will cost more to get a bigger piece as it is highly sought after and valuable.

We can get hold of larger pieces on occasion, although these tend to be more rectangular in shape, unlike smaller pieces that can be more rounded.

One possible alternative to Moldavite is our Tektite Tumblestones which are from the same crystalline family as Moldavite (the Tektite family) and you may find you can still tune into extra-terrestrial properties from these crystals, but have the advantage of being a much bigger stone for your money.

Buy Moldavite from us now by clicking here!

I hope that you’ve enjoyed reading this brief topic on Moldavite, which I hope answers a few questions for some people. Please feel free to contact us, or sign up for a free account and leave a comment to any of our blogs. Being a member entitles you to a discount on your purchases with the coupon code ‘mydiscount’ at the checkout.