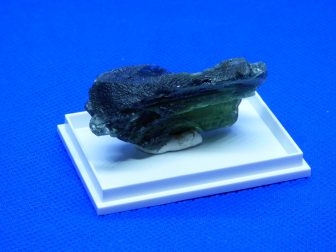 Moldavite is often considered to be “born from the stars” because it has an extra-terrestrial origin. It falls in the tektite group and currently, scientists have theorized that tektites are produced by the rapid heating and eventual cooling of quartz-rich soils and rocks. The latest hypothesis is that moldavite and, in the same way, other tektites are the result of the terrestrial impact and represent molten target rocks expelled during crater forming.

Moldavite is usually sold in two main grades; standard and museum-grade, which naturally shows greater transparency and offers a distinct fern-like pattern. Either of the types has become fairly costly per gram since it is hard to find a genuine Moldavite in nature. Moldavite occurs in a variety of shades of green, including deep, forest-green, and pale to olive-green. The most desirable colour is a pure, light to medium green with no brown. The finest specimens are transparent and are known to be exceptionally rare. The most common shapes are those that result from its molten formation.

Individual tektite varieties are given distinctive names; derived from the region of their strewn field occurrence, and/or the place or country in which they are found. Examples of regional nomenclature include “moldavites”, named for the Moldau River in the Czech Republic, and “bediasites”, named for the Bedias Indians, for those found in Texas.

Indochinite, is a Tektite very similar to Moldavite.

Latest posts
Categories
Archives
Subscribe to Blog via Email
Find a crystal / product
NewsletterPlease subscribe to our Newsletter for updates, seasonal discounts and other offers...

Looking for Moldavite? Why not try our newly stocked Moldavite alternative, Indochinite instead? Dismiss